Sun City resident Art “Karts” Huseonica will attempt to set a hiking record on the Arizona Trail this fall. You can track him here starting October 7, 2018.

Starting on October 7, 2018 Karts will hike from Utah to Mexico on the 800-mile Arizona Trail. If successful he will set a record for being the oldest hiker at 67 to yo-yo the difficult trail. He solo hiked from Mexico to Utah earlier in 2018 and must complete the hike in the reverse direction by December 31, 2018.

Only four others have yo-yo’d (round trip) the trail, but they were all in their 20’s and 30’s. In addition to the training regime, Karts spends a great deal of time and energy on logistics. This solo, supported hike will permit him to receive resupply boxes of food along the route. He can also take rides from volunteers into local towns such as Strawberry and Kearny for resupply. Kearny is frequently referred to as the friendliest town on the Arizona Trail.

Karts has received extensive preparatory medical support from Banner Health in Sun City to prepare for the grueling hike, which he is referring to as his “Arizonian Grit” hike.

During the hike, which covers a myriad of challenging terrains, he will be wearing an orange ribbon to honor a U.S. Navy shipmate, Al Derbyshire, who is suffering from COPD.

Karts has also aligned with the Beads of Courage project, carrying beads he’ll later share with children suffering from serious illnesses. He joins others such as astronaut Buzz Aldrin, the Dave Matthews Band, and country star Luke Bryan in wearing beads. 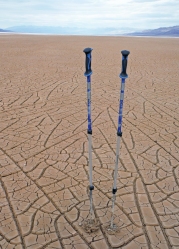 Thus, he was inspired to refer to his hike as “Arizonian Grit.” This hike moniker reflects the determination it takes to accomplish something without quitting, similar to the fight that many have taken on against serious illnesses. This includes Kart’s brother Bobby, who recently passed away.

Key to support for this record attempt are sponsors that include Epic Wipes extra large wet wipes, ArmaSkin liner anti-blister socks, Wild Zora food and meat bars, Huppybar nut and seed bars, and SoulCare skin products for the outdoors. More sponsors will be added as the hike draws near with a trail angel’s shuttle ride to the remote northern terminus of the Arizona Trail.

Here is one of several articles written by the Sun City INDEPENDENT about the upcoming adventure.

Karts is a 1968 graduate of Homer-Center High School in Homer City, Pennsylvania, USA, is retired U.S. Navy, and a retired associate professor. He lives in Sun City, Arizona, USA with his wife Karen Carlsen Huseonica. He is an active member of the Sun City Hikers and the Sun City PRIDES.